Dartmoor lead rein pony Vean Harry Hawk and his 6 year old rider Cariss Boyd have had a fantastic season competing in the North of Scotland. Read about their run of results.

Dartmoor lead rein pony Vean Harry Hawk and his 6 year old rider Cariss Boyd have had a fantastic season competing in the North of Scotland. They recently competed at the Black Isle Show near Inverness with them clinching the overall Supreme title. They also won the Mountain & Moorland Mini Champion and overall Mini Supreme Champion. Vean Harry Hawk is owned by Ewen and Tracey Boyd from Stemster, Halkirk. Harry and Cariss have had much success this season standing Reserve Pony Champion at Caithness Riding Club winter and summer shows and Supreme Champion at Ross Shire Riding Club Show. Their next event sees them travelling to Blair Castle Horse Trials this week to compete in the NPS Scotland Lead Rein and First Ridden Finals which they qualified for in June.

Judging the supreme was Mrs Evelyn Pottie, Ardersier, who said ‘I thought all the champions were fabulous, I got a tingle when I saw the pony move off into trot and that clinched it for me, it was a lovely child’s pony, with perfect manners’. Following the initial mountain and moorland championship, Miss Pat Rennie, judging, said: ‘It was a nice quiet, kind pony and no bother to the child or handler; they were in perfect partnership together and experienced the worst of the weather. 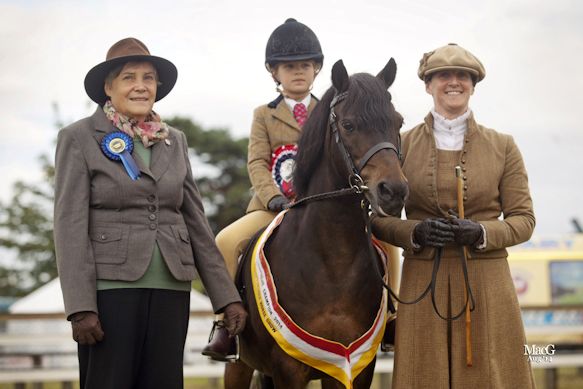 Photos taken by Catherine MacGregor Photography
Vean Harry Hawk and Cariss & Tracey Boyd winning the Supreme Championship at the Black Isle Show, Inverness
By continuing to browse the site you are agreeing to our use of cookies. Find out more on our privacy and cookies page.